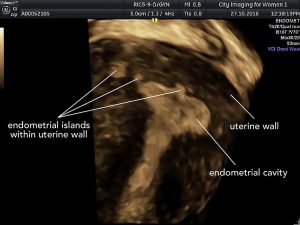 Adenomyosis is a condition of the uterus that is diagnosed when there are glands and supporting structures of the endometrium found inside the muscular layers of the uterus. It is a common cause of pain and abnormal bleeding in women and its features often overlap the symptoms of endometriosis and in fact the two may co-exist in the same woman. Similar to the problem we face with endometriosis, the exact number of women suffering adenomyosis at any one time is difficult to accurately assess, since strictly speaking, it is necessary to see the glands and supporting structures in the muscle of the uterus. This of course requires removal of a piece or all of the uterus and this has obvious limitations.

High quality scans by ultrasound or MRI are often used as a much more acceptable and much less invasive method for making the diagnosis when it is suspected. Studies show that the diagnosis of adenomyosis is made more frequently over the last 20 years, but this may not be because there is an increase in the number of women who now have the disease, but rather that we are better at making the diagnosis for these women.

The main symptoms of adenomyosis are pain and heavy menstrual bleeding (HMB). However, even these two seemingly simple symptoms are debated by researchers as being typical of the disease – sounds familiar right with the same issues present in women with endometriosis (1, 2). Researchers have also suggested that adenomyosis is often not associated with infertility, although this may be in part due to it being more common for women in their 30’s and 40’s who have finished having their family (with pregnancy being a risk factor – see below) (3). However since many women are delaying pregnancy until this time, there is increasing scientific support that there is an impact on both spontaneous and assisted pregnancy when adenomyosis is present (4-7).

For a disease that is suggested to affect 20-35% of women (3, 8-11) we still don’t know what the causes of adenomyosis are. Risk factors for the development of adenomyosis that have been well documented include any type of pregnancy with termination of pregnancy and caesarean deliveries considered more likely contributors due to surgical instruments being used in the uterus that may push the lining cells into the muscle. Other risk factors include longer oestrogen exposure such as an early time of first period, short duration between the menstrual cycles and obesity (12).

The association between adenomyosis and endometriosis is hotly debated as to whether they are separate entities or part of a continuum of diseases. Studies using ultrasound or MRI certainly support this association and it has been long considered that there is a similar pathway to both diseases with the definition of adenomyosis really being ‘endometriosis inside the uterine muscle’.

So if you consider that the ultimate way or making the diagnosis is to remove the uterus, cut it up and look at the entire organ under the microscope, you can see that this method of diagnosis has considerable flaws for most women – even those who may have completed their family. Add into this ‘discussion’ (OK, argument) by doctors about the exact definition for making the diagnosis even in this method and you can see we have a problem. You can potentially take a biopsy to confirm the diagnosis with a long thin needle and that may work if you get the right area of the uterus, but if you miss it then you have an incorrect diagnosis. And what if by taking the biopsy through the endometrium you may actually cause the disease in the first place? So that is far from perfect too. You could do a laparoscopic biopsy but that involves a general anaesthetic and is a much more major procedure – especially considering you may again miss the area where the disease is if it is only in a limited place in the uterine muscle.

Non-invasive methods for the diagnosis of adenomyosis is certainly possible, and there is good scientific support for the use of either ultrasound or MRI in the diagnosis (13). As for endometriosis, ultrasound requires an expert eye to be accurate but is equal to MRI as well as being cheaper and more readily available.

There are new techniques being investigated to improve the diagnosis, but these are the realm of research at the moment and not generally available (nor should they be until they are fully evaluated).

Broadly speaking, abnormal bleeding, pelvic pain and infertility are the three symptoms that women with adenomyosis might present to their care provider. Heavy menstrual bleeding does not seem to be highly predictive for all forms of adenomyosis, although with more severe forms of adenomyosis, heavy bleeding is more likely to be a major symptom (1). Dysmenorrhea and other forms of pelvic pain are often present in women with adenomyosis, although there is nothing about the pain that differentiates adenomyosis from other conditions such as endometriosis or leiomyomas that may also cause pain, so describing the pattern, frequency, location and severity of pain remains important for your health care provider but does require additional information to make the diagnosis (12, 14, 15).

There is still no universal classification system for adenomyosis, although the terms focal (localized), diffuse (generalized), adenomyoma (a concentration of adenomyotic cells that may mimic a fibroid but grows within the muscle rather than pushing it apart) and specific disease location are commonly used when describing this disease. The principle problem of not having a classification system is that comparison of disease and possible treatments for women are thwarted.

The treatment of adenomyosis will depend on the presence of specific symptoms such as pain, AUB or infertility. Treatment options will also vary according to these presenting symptoms and fall into medical treatments, surgical options, radiologic or sonographic interventions or combinations of these choices.

Medical options with simple medications are often used first line in the treatment of adenomyosis and anti-inflammatory medications and the combined oral contraceptive pill are commonly used for both the issues associated with bleeding and pain, although there are limited data from studies to demonstrate effectiveness specific for adenomyosis. The best studied of the medical options remains the Mirena ™ where there are studies to show that this medical option may be of equal benefit to hysterectomy (and clearly the reversible nature of the Mirena for future fertility is often desirable) (16). Overall, satisfaction with Mirena for adenomyosis is reported to be about 70% (17) and makes this a very reasonable medical option for many women with adenomyosis related symptoms.

Drugs such as zoladex, danazol, and aromatase inhibitors (anti-oestrogens used for women with breast cancer) are also reported to be helpful for women with adenomyosis (18-22), although the side effects of these medications and the limited time that they may be used limit their applicability. Generally, these medications should be used by specialists in the area of adenomyosis and pelvic pain such as an endometriosis specialist.

Surgical options are available and have been described and are grouped as this that are conservative – with the intent of maintaining fertility and keeping the uterus, conservative with no intent of fertility such as endometrial ablation (after which pregnancy is contra-indicated), or non-conservative where the entire uterus is removed. Hysterectomy in any form offers the advantage of freedom from bleeding and no chance of recurrence and is considered the gold standard treatment for women who have no desire for future fertility since it eliminated disease by removing the uterine musculature. Clearly it is not a suitable treatment for many women with adenomyosis!

The most challenging of the surgical treatment options is conservative treatment with the view of maintaining (perhaps even enhancing) fertility. This is not easy surgery and from some of the most experienced centres in the world, complete removal of disease is associated with a pregnancy rate of 60% and where disease is only partially removed this is reduced to about 50% (although partial removal may in fact be a signal of more extensive disease in the first circumstance and this could be a factor in the lower response rate). There are few well-conducted studies in this area, since it is very difficult to recruit to studies such as these.

A high degree of surgical skill is required for such fertility sparing procedures and whilst there are any techniques described for removal of adenomyosis, there is no universally accepted approach with individual techniques being promoted as successful.

The use of high intensity ultrasound beamed into the body from outside under X ray or MRI guidance and techniques such as uterine artery occlusion where the blood supply to the uterus is blocked with tiny plastic particles have been reported as treatment options for women with adenomyosis and again reported as successful, however the science behind these studies is of variable quality. No single technique appears to be universally acceptable and all report a decrease in symptoms such as bleeding and pain and improvement in fertility although it is essential that more research is undertaken to evaluate the long term benefits and risks of these (as for other interventions such as surgery) and the effects on fertility in particular.

For women with adenomyosis who wish to retain their fertility, there are potential impacts of the disease on spontaneous pregnancy without treatment, on any form of assisted reproduction (such as IVF) and pregnancy outcomes following any procedural interventions such as surgery. Changes in the way the tubes and uterus contract may be responsible for reduced fertility for women with adenomyosis and this can lead to both poor sperm transport for conception to occur and decreased chance of an embryo implanting in the uterus. If IVF is required then success rates are reported to be reduced to less than 50%, with a combination of factors involved.

Once pregnant, women with adenomyosis are more likely to have premature delivery or premature rupture of membranes during their pregnancy and they are at greater risk for placental problems such as placenta praevia (low lying placenta that may lead to heavy bleeding) and placenta accreta (the placenta being stuck to the uterine muscle (23). These issues may lead to poorer growth in the baby and where there has been reduction in the thickness of the muscular uterine walls, there is an increased risk of this area rupturing during pregnancy or more likely during labour when there are higher pressures placed on the uterus. Studies have estimated that this risk may be up to 10% (24).

Pacific Endometriosis and Pelvic Surgery will be closing every Friday at 12:00 noon.

Our office will be open:

*** Patient portals will not be monitored after hours or on weekends.